Your kids are so…

So this post really isn’t about technology; I just need to brag about my kids!

One thing I’m guilty of as a dad is that I’m hard on my kids. My wife and I have rules and expectations set up and we expect the kids to follow them. These aren’t difficult rules – things as simple as turn off lights and flush the toilet (I mean, does that even need to be a rule?!?). Yet I get so frustrated when they don’t follow the rules or do what I think they should.

Then I think back to when I was a kid. Did I always follow the rules my parents set out for me? Did I always turn off the lights? Did I always flush the toilet? Of course I did. That’s just nasty. Kids do stupid things.

And of course, they usually are better for others than they are for their parents. We used to hear things like, “Oh, T is so helpful!” and then think about how he got mad when we asked him to help clean the house. A great example is happening right now. As I sit in my basement office writing this, my younger two kids are screaming and fighting with each other, probably over something stupid.

But you know what? When someone praises my kids, I swell with pride inside. When I step back and look at my kids from an “outsiders” point of view, I have some pretty awesome kids. 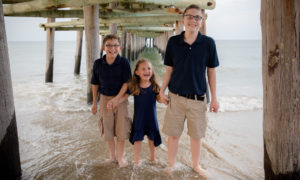 My oldest is spending the summer between his freshman and sophomore year of high school working almost 40 hours a week at his school, getting the technology ready for the upcoming school year. He’s up and at work every day by 7:00. You know what he wants to use the money for? He wants to split it between saving for college and his Eagle Scout project. After work, he comes home for a couple of hours, then it’s off to play practice because he’s doing lights and sound for the children’s theatre.

D is spending his summer playing on three baseball teams. Every day, he’s either at practice or a game. Every weekend, we’re at tournaments all over NE Indiana. He was even sick this past weekend but played in a game where they needed a player. One of his coaches texted me this last night, “I wish half the team had the heart and passion that D has, I love that about him, with his attitude the sky’s is [sic] the limit.” That’s awesome.

My daughter, with all her “I’m the youngest, age 6 going on 16, the baby girl” attitude is truly a sweet person. She always wants to go say hi to the neighbors. Or, she’ll make cards for DW and I out of scrap paper. Last night, she wanted to teach me all about popcorn words and was shocked when I said I never learned those in school.

I have great kids… and I need to do a better job of recognizing that. Even if they are streaming when I’m on a work call, or their rooms are totally trashed, or even if they leave the lights, TV and fan on.

But not when they forget to flush the toilet. Who does that? That’s just revolting.